I recall quite vividly that in 2008, this tiny island city was proud to host the world’s first Formula-One night race. Much was boasted about how the event of such a scale was promising hike in the tourism & hospitality industries, as well as the swelling numbers that retailers in the vicinity was going to enjoy in lieu of increased human traffic during the annual 3-day event for the 4-5years to follow. 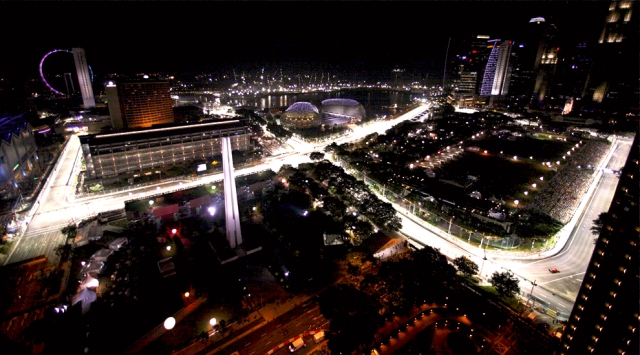 Amidst the hype & anticipation, especially for the novelty of a world’s first night race to take place, the island witnessed a choke hold on the district for the race route. Road closures at several junctions caused great inconveniences to the daily business operations & road users. While commuters never really got to their destinations due to bus route diversions to accommodate the preparation logistics.

The route is seen lined with layers of fencing & safety barricades, decked with approximately 1600 light projectors (or more) at 4 meters apart to simulate day time visibility (approx 10’00-25’000lx). The light intensity was almost 4 times of those lights used in football stadiums. Assuming 1000w per light projector, we are looking at ±1’600’000 watts for lighting up the race route alone, not inclusive of all other appliances for the 3-day event.

Starting from the 1st night race in 2008, the business hike that was anticipated & promised was far from being fulfilled. Retail & F&B businesses saw some dip in sales as compared to normal days. Particularly when the bulk of the crowd is primarily interested in nothing else but the ongoing race, while others avoid going into town to avoid the crowd (especially if they do not fancy the sport).

2011 being the 4th night race to take place on the race calendar, it didn’t seem that the businesses affected saw any change in the annual trend, as & when the event comes along. Safe for the hoteliers, event organizers & post race parties ongoing in clubs all over town.

It appears in recent news that there has been some cha-cha ongoing between local organizers & the F1 administrations with regards to the contracts & fine prints. Will the island’s annual night race continue to be featured in the race calendar in years to follow after 2012, or will it be the swan song next year? We should be expecting some conclusion to the matter soon.

i bring architecture/ developments to life when night falls, i see the world in a different light. Dedicated a chunk of my adult life towards my profession & passion, for which i'm grateful & proud to have accomplished. My past time, i hang our with my pals over food & drinks, break sweat over football, and pampering myself during 'me' time. Life's too short to hold back our expressions, speaking our thoughts add colors to the boring & mundane lives of the walking dead.
View all posts by Alvin T. →
This entry was posted in Commentary and tagged barricades, businesses, city hall, esplanade, F1, fencing, flier, floodlight, flyer, formula, fullerton, grand, hotels, marina, night, nightscape, one, padang, paddock, prix, projectors, race, restaurants, road, road closure, SGP, singapore, skyline, street, suntec. Bookmark the permalink.