Lee Kuan Yew, Survived By A Nation (And More)

Singapore, the island city, where the red dot on the atlas is larger than the land mass: bright shining star of South East Asia dimmed for a moment this week. 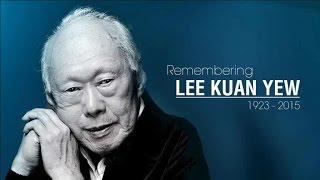 It didn’t come as a surprise to those who’ve been following the rapidly deteriorating health condition of the 91 year old Mr Lee Kuan Yew. The news of his passing shook the planet on the morning of March 23, 2015 (Monday). His time of passing announced, at exactly 0318hrs (GMT+8hrs).

For the lesser traveled, some don’t exactly know where Singapore is situated. Nonetheless, not many can deny not ever reading, hearing, knowing about the man who shaped the transformation of an under-developed island city, into a 1st world nation.

Mr Lee Kuan Yew, till this day (even in his death) is not only remembered for his hard-line brand of politics (albeit some were deemed controversial), but he is also recognized for influencing the rapid growth of several other nations. Word has it, that he was looked upon as a mentoring character to several renowned national leaders in the continent.

There will be those who adore him, there will also be those who hate him (fact: impossible to please everyone). Whichever side of the coin is viewed, a dime is a dime.

In slightly less than 4 decades, this lackluster island city, no different, if not, inferior to her neighbors underwent a major metamorphosis, and is now recognized one among the Four Asian Dragons or Tigers.

Back in the days, when the island was still under British colonial rule, Lee, together with a handful of like-minded cohort mates who returned from Cambridge, saw a vision not many could imagine. Singapore joined the Malaysian Federation, but due to ideological differences, was expelled shortly after the merger.

Probably one of the very few (if not, only) bloodless independence the world has ever witnessed. The circumstance of a resource-less, talent-limited island nation, warrants no margin for error.

Testaments of the ordinary man who did extraordinary feats is sprouting everywhere- online & offline. Some extremes make him seem god-like, some go to the extent to sounding as though he (in literal sense) fathered them.

Whichever way the pendulum swings, the oscillation of a longest ever serving statesman- who functioned like clockwork, has stopped. The numbers of the ‘lying in state at Parliament house’ visitors would probably go down in the Guinness book of Records: for the most voluntary attendance queuing to pay their last respect to a former statesman.

Mortality knocks on everyone’s doors. Mourning shall soon pass, and all shall be celebrating his Life & Legacy.

Word has it, that it was the late Mr Lee’s greatest wish to witness the SG50 celebrations. Will you grant him his last wish of a nation dressed in RED, and send him off this Sunday?

Mar 29, 2015 (Sunday), be sure to expect people lining the streets along the route between Parliament House, all the way to Mandai Crematorium.